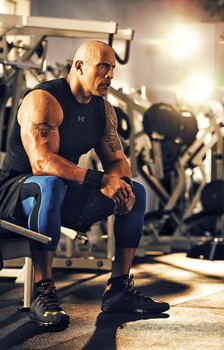 Call him crazy, I dare you.

Dwayne Johnson believes that his preposterous wakeup call-time and his planned and measured diet are the keys to his success and his rise to stardom. Sure, he wakes up daily at four in the morning while the rest of us our off deep in our REM sleep. And, sure, he eats 10 pounds of food over the course of seven meals a day of a high-protein, low-carb diet. But his dedication to his craft is what truly sets Johnson apart from other gym junkies. First things first, Johnson takes his partner in crime, his French bulldog Hobbs, into what he refers to as his “Iron Paradise.” Here is where the real work is done. Johnson starts the day with 45 minutes of cardio, before diving into his multiple breakfasts. These breakfasts are carefully crafted with loads of cod, rice, and veggies as well as chicken, filet mignon, and eggs. Before you know it, Johnson is winding down the day with his seventh meal, complete with 30 grams of casein protein, a 10 egg-white omelette, a cup of veggies, and a tablespoon of omega-3 fish oil. Whether he is at home in Miami, abroad doing PR for one of his projects, and everywhere in between, this is his routine. Every. Single. Day. Johnson’s enviable workout routine and wakeup time were the inspiration for his 2016 partnership with Under Armour, known as “Project Rock.” Project Rock is Johnson’s way of assisting individuals in reaching their “hopes, goals, dreams, and aspirations.” The first of four planned projects in Project Rock was an official Project Rock duffle bag and backpack, which sold out in minutes. The second project was the famed “Rock Clock.” The Rock Clock is an application for smartphones that motivates users to get out of bed and to pursue their aspirations. The application comes equipped with 25 audio files, which include inspirational messages from Johnson himself as well as a few songs played and sung by him, including “Good Morning Sunshine.” The last, best, and most likely least used feature of the Rock Clock is the ability to set your alarm to “Rock Time.” Rock Time means that your alarm is synchronized to Johnson’s actual alarm clock and will wake you up when the man himself is up and get at ‘em. The Rock Clock clocked in more than a million downloads in only the first week of its release.
So now not only can you watch Johnson’s legendary professional wrestling matches, see him produce and star on HBO’s Ballers, and catch him on the big screen in tons of popular movies, but you can also wake up with ‘The Rock’, train like ‘The Rock’, and eat like ‘The Rock’. If you’re not careful, you might just become ‘The Rock’.

Who am I kidding? We all know there’s only one Dwayne “The Rock” Johnson.