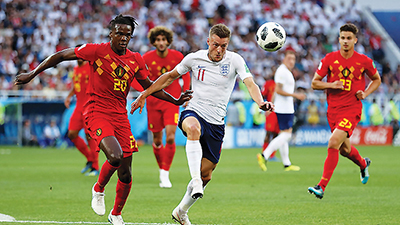 As the World Cup comes to an end, fans are hit with the fact that the next one won’t come again for another four years. Regardless, the 2018 World Cup has been one of the most exciting ones yet, with unexpected wins and losses popping up all over the game and the United States not taking a part in such an enormous event. This year’s World Cup took place in 11 different cities of Russia, began on June 14, and will end with a thrilling match between France and Croatia on July 15. The Process of Elimination

The 32 nations were put together into a total of eight groups. They ranged from A to H, and the top two teams of each group were Uruguay and Russia, Spain and Portugal, France and Denmark, Croatia and Argentina, Brazil and Switzerland, Sweden and Mexico, Belgium and England, and Colombia and Japan, respectively.

These teams then advanced to the Round of 16, which gave us the games between France and Argentina, Uruguay and Portugal, Spain and Russia, Croatia and Denmark, Brazil and Mexico, Belgium and Japan, Sweden and Switzerland, and Colombia and England. From there came the quarter-finals, with Uruguay and France, Brazil and Belgium, Sweden and England, and Russia and Croatia.

Those who won the quarter-finals competed in the semi-finals, which put France against Belgium and Croatia against England, who will come face to face with Belgium in the third place playoff. And of course, there is the World Cup final, with France and Croatia. France and Croatia To Fight For the World Cup

The epic soccer tournament is about to come to an end, and all spectators are on the edge of their seats as they anticipate the World Cup final. The game will be played between France and Croatia and will take place on Sunday, July 15 at the Luzhniki Stadium in Moscow, Russia. France was actually expected to be a part of the final. The country, which was part of Group C with Denmark, Peru, and Australia, was favored before the matches even started. France easily butted out Australia and Peru, and their tie with Denmark brought them the first place position to play against Argentina, whom they also won. Uruguay and Belgium were also easily overpowered by France.   Croatia, on the other hand, came as more of a surprise. This is the country’s first World Cup final, and they worked hard to get here. Croatia was put in Group D with Argentina, Nigeria, and Iceland, but few had hopes of the country winning over Argentina. The determined country then took down Denmark, tied with Russia, and even England, giving them a well-earned spot in the finals. The anticipation for the France and Croatia match is high, but France is the favored team at the moment. In the game, Kylian Mbappe of France and Luka Modric of Croatia are the key players you should have your eyes on. When 2022 rolls around, the World Cup will be held at Qatar. This next major tournament might be expanded from 32 teams to 48, and the details are currently being discussed. As for the 2026 tournament, expansion has already been agreed upon, and includes the United States, Mexico, and Canada. The president of FIFA, Gianni Infantino, has confirmed that the 2022 World Cup will begin on November 21 and end on December 18.